Shopping Cart
Your Cart is Empty
Quantity:
Subtotal
Taxes
Shipping
Total
There was an error with PayPalClick here to try again

Thank you for your business!You should be receiving an order confirmation from Paypal shortly.Exit Shopping Cart

Since pagan times, the images of fire and the hearth have been associated with luck - when a new bride inherited the fire irons, she symbolically inherited a home and a new family. It's because of his blackened face and his relationship with hearths and fires that the chimney sweep carries the luck with him where ever he goes, and when you meet him, his luck rubs off onto you.

Coal, again connected with fire and hearths, is also believed to be lucky; when given by a sweep the luck is multiplied. Soldiers have carried small lumps of coal into battle to ensure survival, and sailors kept coal in their pockets while at sea.

If a chimney sweep meets a bride and groom at their wedding, it's a very good omen for their future, especially if he wishes them good luck.

Even though sweeps have been giving luck for over 100 years, it is still prestigious for a sweep to turn up at a wedding; so special that pictures of the encounter often make their way into the local press.

... not by mere chance was a sooty chimney-sweeper sauntering in front of Kensington Palace on the wedding morning of Prince Philip and Princess Elizabeth, thereby affording the excited bridegroom an opportunity to dash out from the royal apartments to wring his grubby hand for chimney sweep's luck.

Good Luck is sure to rub off when the groom shakes hands with a Lucky Chimney Sweep who will have a "Lucky Kiss" for the new bride. With the power vested in him by King George III, he will recite a goodwill message and present a keepsake of good fortune which the happy couple may keep and treasure ... This follows a tradition that started about 200 years ago when a London chimney sweeper saved the life of King George III. The sweep had been the only person brave enough to stop the King's out of control horses and carriage.

By Royal Decree the King proclaimed that all sweeps are good luck bearers and should be treated with respect. The folklore was established and to this day chimney sweepers are still invited to attend weddings and kiss the bride for good luck.

To see a Chimney Sweep on your wedding day is a sign of Good Luck & Fertility for the newly married couple. When a Lucky Chimney Sweep attends the wedding, this 200 year old timeless tradition is said to bring Good Luck to the happy couple.

The Sweep greets the guests and Bride and Groom, the Good Luck custom of the Bride kissing the Sweep and the Groom shaking his hand is performed, then he reads a special message and presents the couple with a Traditional Scroll, Keepsake Kilt pin, and a bottle of bubbly is presented to the newlyweds with best wishes for the future.

Then a photo opportunity is available with the Lucky Sweep for guests and the official photographer to capture this traditional custom. 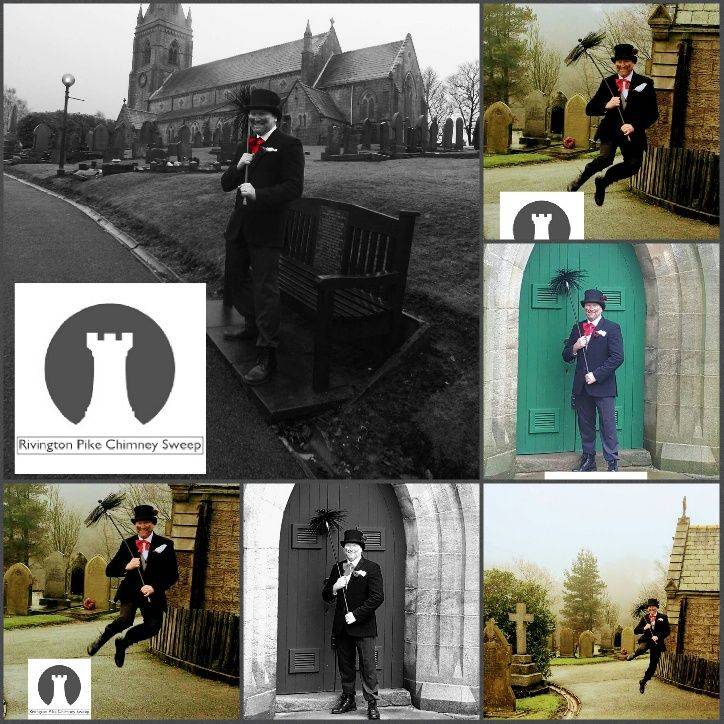 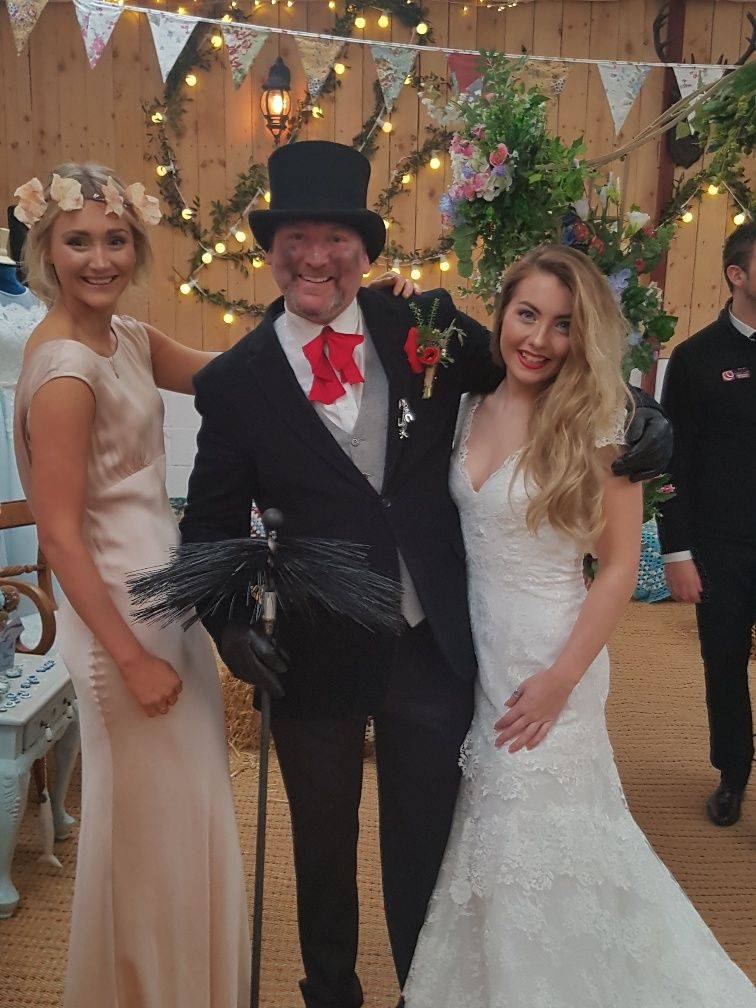 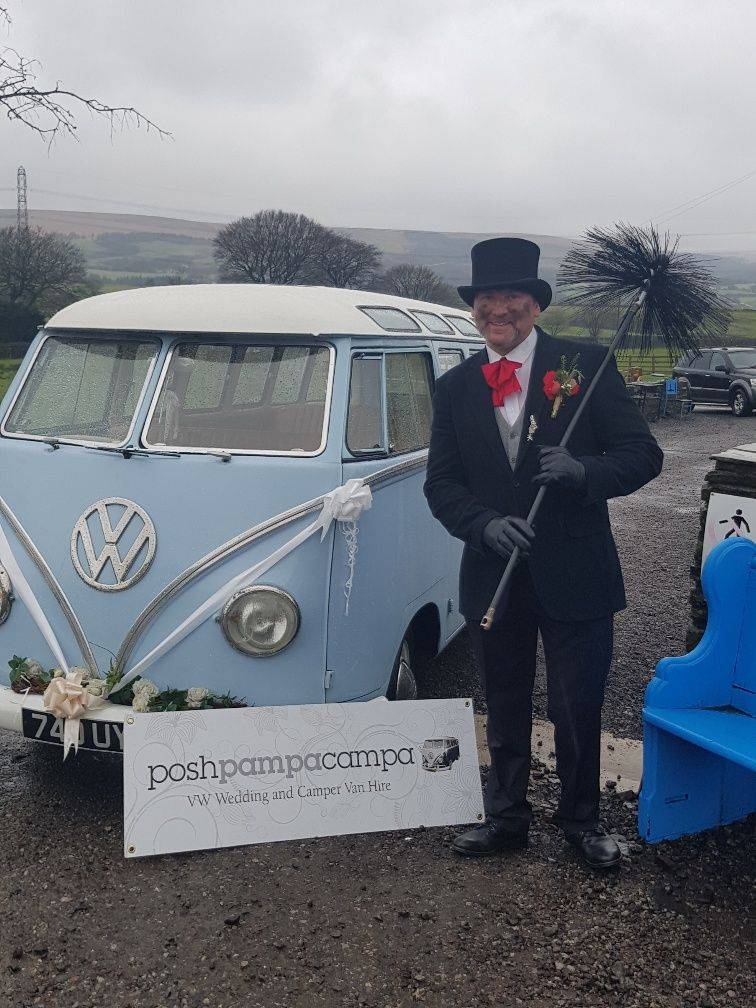 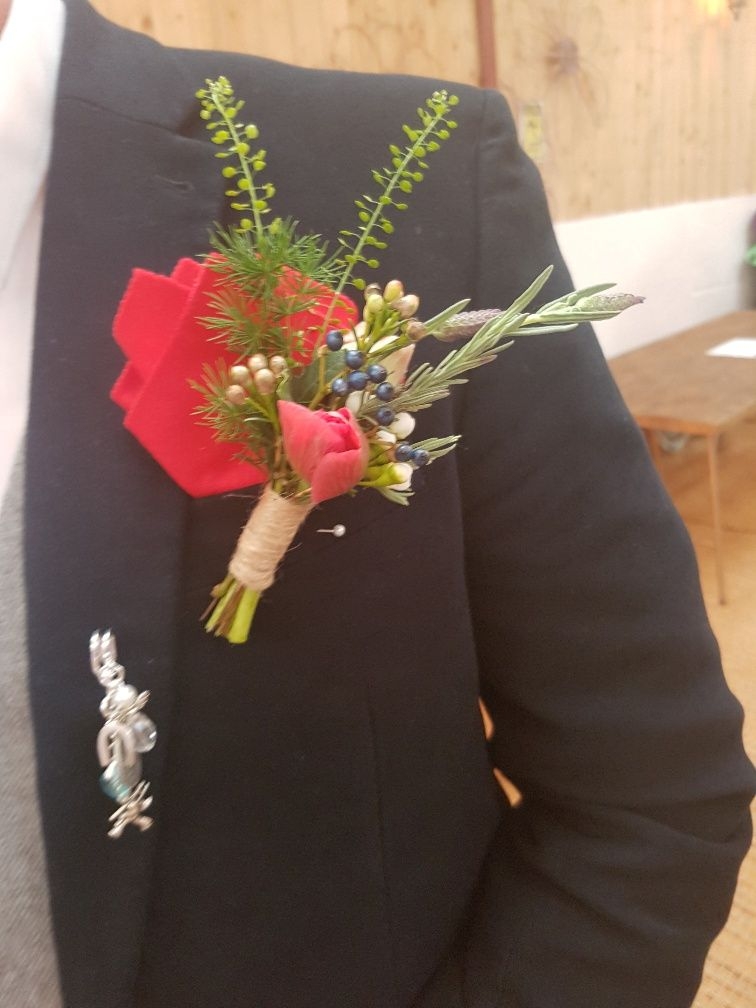 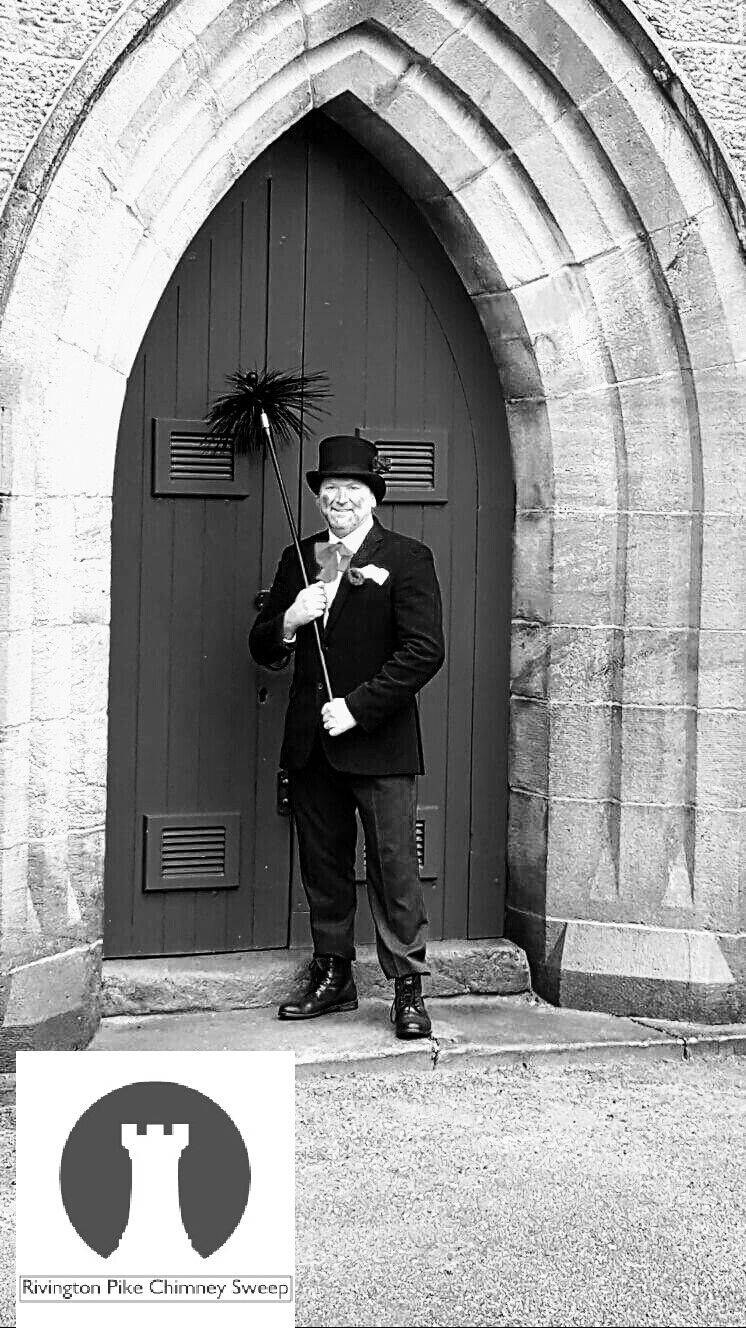 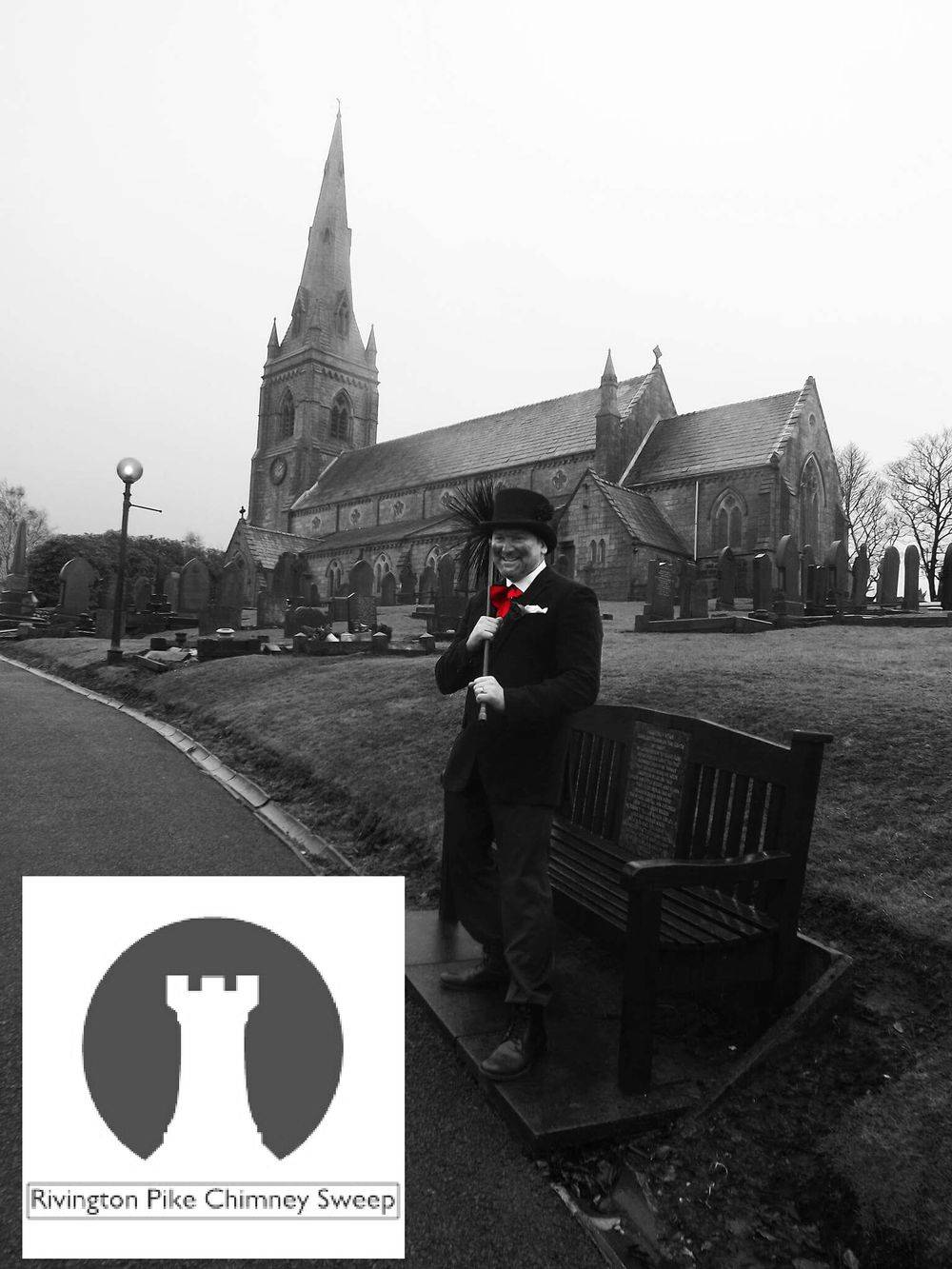 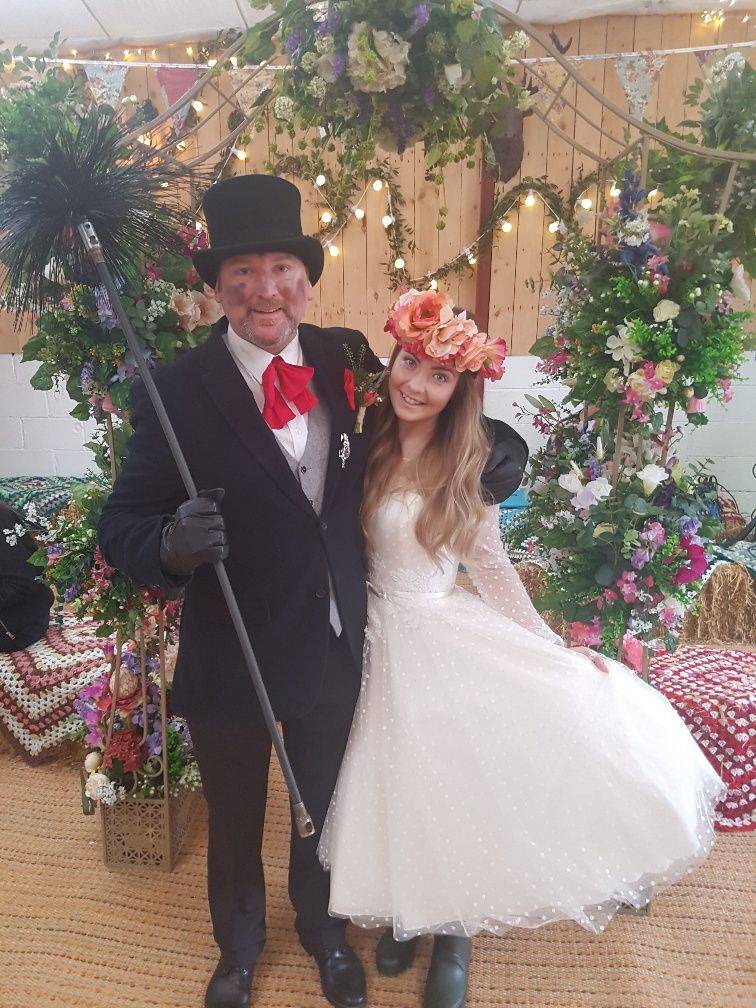